"They Called Us Senseless Beggars"

Northern Nigeria has been plagued by persistent conflicts in recent years, which have claimed over 20,000 lives. Apart from the general impact of the conflict, it has also contributed to an alarming increase in the number of Persons with Disabilities (PWDs) and made all PWDs more vulnerable. Disability resulting from conflict-related injuries is becoming more prevalent than those due to other causes, such as diseases, accidents etc. The conflict has had a negative impact on PWDs’ living conditions, has compromised their ability to pursue economics activities and earn a livelihood, as well as to enjoy a social and cultural life. This negative impact has been especially felt by children and women, who are more prone to all kind of vulnerabilities.

World Disability Report of 2011 stated that, about 25 Million Nigerians have at least one disability, while 3.6 million of that figure have very significance difficulties in going about their business. Of the 84 million estimated PWDs in Africa, 29% are located in Nigeria. More than 50% of the 25 million disabled Nigerians are females. Women and girls with disabilities are at 3 times greater risk of suffering physical, sexual and economic abuse than women without disabilities. Due to the Boko Haram insurgency, the North-East hosts the highest number of persons with disabilities. Only 5% of the Nigerian adults with disability are literate, while more than 90% of children with disabilities have no access to elementary education. 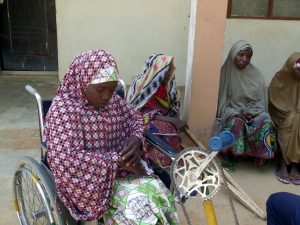 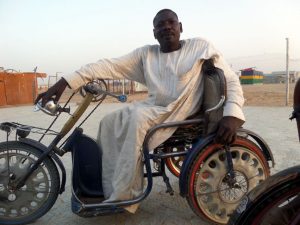 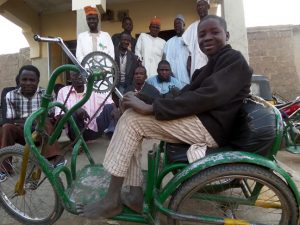 This report, produced by the Grassroots Researchers Associations (GRA), examined the conditions, vulnerabilities and rights of PWDs in Nigeria, including in particular in the crises-prone North-Eastern States of Borno, Yobe and Adamawa. GRA interviewed 70 PWDs in the North-East region about the impact of the conflicts on their lives and the challenges they face generally. Most of those interviewed reported stigmatization, discrimination, exclusion and neglect of their special needs as major concerns. According to our findings physically-challenged people in North-Eastern Nigeria face discrimination in housing, education, employment, and in access to public transportation. Their needs and concerns are rarely taken into consideration by the state, and they often have no options, choices or control over their lives. Their rights are not systematically upheld. The government does not uphold the rights of PWDs within state institutions, and does not guarantee that these rights are respected throughout Nigerian society. Harsh economic realities prevail, and there is little support outside of benevolent family caregivers for many forms of disabilities. As a result, PWDs are often predisposed to dependence on street begging, which further endangers their lives.

PWDs routinely face social exclusion within their communities in the whole of the study area. Public attitudes and perceptions toward the group are disheartening with strong underlining superstitious/cultural beliefs that result in discrimination against PWDs. Despite advocacy by civil society groups, religious institutions and international communities on the need to support PWDs, the majority of Nigerians still assume that persons with disabilities are incapable beggars who depend on others to provide for them. In nearly half of the interviews we conducted, PWDs repeatedly stated that most people assumed they are lesser humans because of their disabilities.

Those interviewed reported that their rights are violated in many different ways, including opposition by communities against a disabled person to marry a person without a physical disabilities, medical services due to inability to pay bills, participation in pilgrimage trips to holy lands, access to participation in school competitions, the right to rent apartments for housing and commercial purposes, the right to political representation, the right to equal education and their right to life as human beings.

Our findings indicated that the support PWDs need from government agencies and development partners is either significantly lacking or grossly insufficient. Despite the presence of several non-governmental organizations intervening in North- Eastern Nigeria, They have not made the plight of PWDs a priority of their work. There has been little effort by disability-rights NGOs and other institutions to work with PWDs to develop programs that effectively respond to their needs and concerns. The Ministry of Women Affairs and Social Development, which is responsible for special education, social welfare and health services, has failed to develop appropriate programs for the protection of PWDs’ rights. Instead, the Ministry has taken a charity/welfare approach to persons with disabilities.

Although Nigeria has signed the Convention on the Rights of Persons with Disabilities, among other relevant global and regional efforts relating to PWDs, to date it has failed to implement these commitments. Until it does so, the fate and condition of PWDs in Northern Nigeria and the country as a whole will remain a sorry tale to tell in the face of extreme rise in poverty levels.

To address the challenges of the PWDs, a plethora of strategies have to be adopted by all stakeholders at all levels to create a synergy of efforts. Central to any sustainable intervention is presidential assent to the Disability Bill and its passage into law to facilitate a national legal and social framework upon which other efforts hinge.

The government, civil society groups and donors should design their interventions plans and strategies by engaging PWDs and their associations through law makers, relevant local agencies, researchers and other partners in advocacy, policy formulation, decision-making, implementation, monitoring and evaluation. This would provide information for policy-makers, decision-makers and planners to contribute in promoting the rights of PWDs within the contemporary Nigerian society, and therefore facilitate their effective social inclusion within the communities in which they live.